For a long time I paid no attention to the writing of Joyce Carol Oates. But I kept seeing her mentioned in the context of modern American Gothic, being recommended by writers whose work I loved, particularly Stephen King. The admiration was mutual. In 1997 Oates introduced King when he gave his first reading at Princeton University. That day she described him as a great writer of Gothic horror. At different points in their careers King and Oates even had the same editor, Michael Garrett.

But despite the King connection, with so many other books to read Joyce Carol Oates kept slipping from my attention. It was only when I finally decided to read one of her books that I discovered just how incredibly prolific and varied an author she is. Dozens of titles covering a bewildering range of styles, genres and subjects. Eventually I settled on I settled on Bellefleur, the first of a massive series of American Gothic novels.

My dilemma over Joyce Carol Oates made me realise that readers coming to the work of Stephen King for the first time now would face the same problem I did with Oates. I first started reading Stephen King about 35 years ago, when he had only published three books. Since then I’ve read pretty much everything he has written, excepting a few expensive small press publications, a couple of e-book only exclusives and Faithful, a book about a season in the history of the Red Sox baseball team. Which means I’ve read somewhere in the region of 50 – 60 Stephen King books, depending how you count. Is The Green Mile one book or six? (It was originally published in six short volumes, then combined into one). Does the collection The Bachman Books consist of three or four novels? (Originally it contained four early novels written under the Richard Bachman pseudonym. In the ‘90’s King withdrew one, Rage, from the collection.) Do we count the original and revised versions of The Stand and The Gunslinger as two books each, or just one a piece?

However you tally the maths, Stephen King has written a lot of books. And those books include horror, fantasy, science fiction, crime, non-fiction works about writing, photography, baseball… Some are great, some good, a few, not so good. But where to begin? Pick one of the handful of not-so-good books and its always possible a new reader might not venture any further. And that would be a shame.

So here goes with a basic top three books to begin reading Stephen King. The constant King reader might consider they are obvious choices, but perhaps to someone who hasn’t read King there is nothing obvious about it at all. They are among King’s most famous works, are easily accessible titles, great reads, fantastic places to start a journey into the fabulous imagination of Stephen King.

And one more thing. Put aside any memories of any of the films you may have seen based on King’s work. Some are good, a few are great, some terrible. But they are not King. They are someone else’s response, in an entirely different medium, to his work. So for now pretend they don’t exist. We will come to the films in another post, one day not so long from now when the world has moved on.

1: The Shining (1977) was Stephen King’s third published novel. There is a strong argument for saying it as the greatest ‘haunted house’ novel of the 20th century. The ‘haunted house’ being the Overlook Hotel, based on the real Stanley Hotel in Colorado, where King once stayed just as it was preparing to close for the winter. King realised the eerie potential the shut-down hotel would have, and in his fictional version sent a family there so the father, Jack Torrance, could work as caretaker, and not incidentally combat his alcoholism. The family is completed by wife Wendy and five year old son, Danny. The only other character of significance is Dick Halloran, the Overlook’s head chef, and the one who recognises Danny’s psychic ability, his shining. One family, a vast, empty hotel with a dark past, hidden secrets and a black heart. Far more than just a ghost story filled with great set-pieces and chilling thrills (though it is all that), it is King’s brilliant exploration of his characters, trapped in a pressure-cooker environment just waiting for the right catalyst to explode, which makes the novel an enduring modern American classic.

2: Salem’s Lot (1975) was King’s second published novel. Written at a time when vampires were considered passé – Hammer had abandoned Dracula for TV, unable to compete with chainsaws, exorcists, omens and sharks – King penned the ultimate small town horror. The Shining would compress everything into one building, here the terror takes over a town. King gives us the first of his favourite sort of protagonist, the novelist. Successful writer Ben has come home to write his new book. All is not well, but in rational 1970’s America who believes in vampires? Far more than a homage to Bram Stoker, King lets us spend half the book getting to know the people of Salem’s Lot, before putting them through hell on earth. Here you will find a hauntingly terrifying house on the hill, aching suspense and characters and relationships you will care deeply about. Just don’t blame King for Twilight. 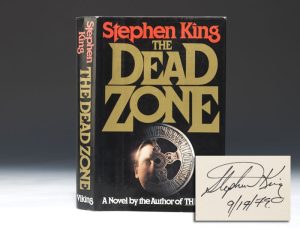 3: The Dead Zone (1979). Johnny Smith is a small town teacher. A quiet, serious, all round good guy. His relationship with fellow teach Sarah looks like it is developing into something more than friendship, but then an accident leaves Johnny in a coma. When he recovers five years have gone by, Sarah is married, and when John touches people he can briefly sense their thoughts. Alienated and embittered, Smith reluctantly helps the police track a serial killer, but on shaking hands with a local politician he sees a much greater danger. The Dead Zone was King’s eighth published book, his seven novel, his sixth book under his own name. It was his most literary work to date, his most melancholy, most affecting. More thriller than horror, it is a powerful story of human resilience, moral responsibility, and a moving love story. Read it and you will be hooked.

As important as where-to-begin it knowing where not. Don’t start with any book with the words The Dark Tower in the title or sub-title. The Dark Tower is a series of eight novels spanning King’s entire writing career, and which at various points crosses over into almost all his other writing. The series is flawed but brilliant, the heart of King’s work. Readers who don’t get the Dark Tower series aren’t true King aficionados, more casual fans. Not that there’s anything wrong with that. The fact is that the Dark Tower books are not among King’s most popular, or accessible work. Think of a monumental cross between The Lord of the Rings and the Clint Eastwood spaghetti Westerns. The eight novels total well over 3000 pages. That’s quite a commitment. Better to start somewhere else then saddle-up to the Dark Tower books once you have a real taste of what King is all about.

Other places not to start. The Colorado Kid, Blockade Billy and Blaze. The first two are interesting but minor novellas which somehow got their own books. Blaze is a good but minor crime novel. The Tommyknockers is a long, bloated science fiction horror epic written in homage to 1950’s alien invasion flicks. Some of it is excellent. There is a good novel in there, but it is just too long, self-indulgent and flabby. Thinner – the only book by King I’ve ever found boring. I couldn’t wait to finish it and read something else. Faithful – a labour of love written for Red Sox fans wanting to read about their team. Probably a no go area for everyone else.