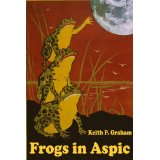 I’m partial to short fiction, especially lately when I have so many interruptions it seems to take forever to finish a novel. So when a collection comes my way that contains numerous short stories, I’m a happy guy. (Come to think of it, I’ve not reviewed any novels here yet. That will change.)

There are 16 stories in Frogs in Aspic, mostly fantasy but with a few science fiction tales sprinkled among them. The lengths vary, but most are relatively short, on the order of 5,000 words or less. Rather than give a synopsis of each one, I’ll tell you about my favorites.

The lead story is “Click Clack, Click Clack”. It’s one of the shorter pieces, but effective nonetheless. The main character is a grieving widow who misses the ticking sound of her late husband’s mechanical heart. This is a character study without a great deal of action.  It reminded me of Bradbury, both in execution and in the way the widow ultimately dealt with her grief.

“Gremlins Over Normandy” would probably have been at home in Unknown back in the late 30s and early 40s. One fighter pilot providing air support for D-Day gets some help from friends that aren’t officially part of the air corps.

“A Nest of Flames” has echoes of The Prestige in that rival pyromancers, a man and a woman, come to terms on the London stage in the 1800s. This was one of the longer selections in the book. I liked the descriptions of the different pyrotechnics they could produce, both singularly and together. While the conclusion wasn’t happy, it was the perfect ending. Still, I would have liked to spend more time with these characters.

The stage is also central to “Farewell Tour”, only this time it’s the concert stage. The guitarist from a tribute band gets the chance of a lifetime, when he’s recruited to perform with his hero, an aging rocker who comes out of retirement for one last tour. Again, not exactly a happy ending but a fitting one. This one was bittersweet.

The title story is a recipe for a frog dish a father prepares with his children in which no frogs are actually harmed. It’s a cute little vignette that should resonate with anyone who has ever spent extended periods of time with a child.

There are plenty of other stories here, including a witch’s Christmas wish, mammoths on the plains, a time traveler sending notes back in time to himself, a mermaid returning to save the man who saved her years earlier, and a duelist who discovers attack dogs aren’t always the best weapon of choice.

As overused as the box of chocolate analogy is, and as much as I hate to use it, that’s the best way I can describe the contents of this collection. Each one is different. Some are sweet, some are bitter, some are tart. The tones, moods, themes, settings, characters, subgenres vary widely. While all of the stories are written in a style of short sentences, without a lot of flowery adjectives, most have little in common with the others. That’s mostly a strength, because I never knew what to expect when I started reading one. Each story was a surprise.

The weakness is that with this much variety, like the chocolate samplers, it’s unlikely everything will be to any given individual’s taste. Most of the stories worked for me. Only a couple, which I won’t name here, did I find weak or predictable.

Unless you have very narrow tastes, the misses will be well out numbered by the hits. Overall, this was an enjoyable collection. It’s perfect for reading when you’ve got a few minutes, like waiting for the bus or standing in line at the DMV.

Frogs in Aspic is currently only available from Amazon. I don’t own a Kindle, but these days it’s not necessary to own every device. Apps are available for a number of devices. I read Frogs in Aspic on an ipad using Amazon’s cloud reader. I can’t say that I found the experience preferable to reading on a dedicated ereader. But that’s not Mr. Graham’s fault.

As far as production values go, the ones here are good overall. There’s a picture of a couple of frogs at the end of each chapter, and the color scheme of the cover art is pleasing. The interactive table of contents worked for all the stories I tried to access from it, although in the interest of full disclosure I didn’t try to access them all that way. In fact, the only complaint I have about the production values was that every once in a while a word would be missing. This tended to happen more often near the end of the book.

So to sum up, Frogs in Aspic is a diverse collection of short stories, perfect for the reader on the go who has to read in snatches. If that sounds appealing to you, check it out.