I don’t intend here to eulogize Edgar Allan Poe (1809-1849) but to discuss some of the contributions he made to the areas of Horror, Science Fiction and Detective Fiction. 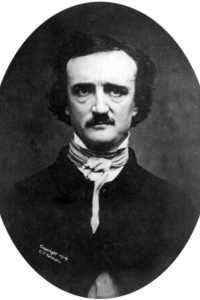 Poe was born in Boston in 1809. One of the most interesting aspects of researching Poe’s background is that no one seems to know exactly what the facts of his life are and his death is even more a mystery. One account says that he went to school in England when he was six and remained there for 5 years. He learned French, Latin and also studied mathematics and history. This detail is not mentioned in other accounts. That he also attended (briefly) the University of Virginia briefly and West Point Academy equally briefly. It is also known that he married his 13 year old cousin when he was 27. Other than this and a few pieces of information accounts vary widely as to whether or not he was a drunkard or took drugs (a fashionable theory about many artists) and what happened the last week of his life which resulted in his death.

In Touched With Fire, a study of modern and historical literary, musical and artistic individuals Dr. Kay Redfield Jamison uses personal letters, writings and other sources to analyze the incidence and prevalence of Mood Disorders (Bi-polar Disorder i.e Manic Depression, Depression and Anxiety) among this distinguished group. She considers Poe to have had Bi-polar disorder and her assertions are backed up by his own letters, stories and poems

One has only to read the opening stanza of “The Raven” – “Once upon and midnight dreary/While I pondered weak and weary” – to know that Poe was familiar with the feelings of depression or, as in his time, melancholia.

In The Fall of the House of Usher Poe outlines his friends fits of melancholy but also his and his family’s history of manic symptoms “I was aware, however, that his very ancient family had been noted, time out of mind, for a very particular sensibility of temperament, displaying itself through long ages in many works of exalted art…” heightened productivity as well as ‘exalted’ feelings are characteristics of mania which Poe himself displayed in his other works. How can someone so accurately (and unconsciously, possibly) describe such states without ever having experienced them?

In this first blog I am going to discuss Poe’s Detective fiction and Science fiction. In his detective stories such as The Murders in the Rue Morgue Poe creates the character of C. August Dupin, a misanthrope who lives in a “time eaten and grotesque manor” with a single companion who also is the chronicler of events in this and the other detective stories. The great Dupin is a man who is preternaturally conscious of everything that goes one around him to the extent that his pronouncements and knowledge seem almost magical until he explains them. With this prodigious intellect he proceeds to solve mysteries which confound both his companion and the local police, in one case getting a cheque for 50,000 francs from a police inspector who bears some considerable resemblance to Inspector Lestraad in the Sherlock Holmes stories. He gets the money by giving the man a letter which has been the subject of a desperate search, including such acts as taking tables apart to look to see if their legs were hollow and other similarly extreme techniques.

Since The Murders in the Rue Morgue first appeared in 1841 and the first of the Sherlock Holmes stories appears in 1887, it’s easy to see at least one of the influences on Conan Doyle’s celebrated detective.

As for Poe’s Science Fiction stories they, too seem to be the base of many more celebrated Science Fiction. Even the great Jules Verne acknowledged his influence in a newspaper article.

Science Fiction has among its characteristics the use of scientific knowledge of the present day to lend credence to stories which are otherwise creations of the imagination. Such stories include tales of the future or the past, or trips to the moon and other remote regions of space, discussions of fantastical places and other works of the imagination some of which include social commentary and messages on themes such as truth, the possible impact of human actions and scientific discoveries on the future, and many others.

Poe’s Science Fiction had messages of a more satirical nature. In Some Conversations with a Mummy, Poe describes through his narrator what ensues when electricity is passed though the body of a mummy of approximately 4,000 years vintage. Different parts of the body are electrified resulting in some very funny responses such as when one of the characters applies electrical current to the mummy’s toe and receives a kick so hard that it knocks him out the window behind him.

Finally, however, they apply the current to the brain area of the mummy’s body and what results is a funny and fantastical conversation between the mummy and the several other characters in the story. They discuss such things as to how to not only live for a thousand years or so but how to do it in shifts by being embalmed for shorter or longer periods in between ‘bouts of life’.

In Descent into the Maelstrom Poe’s satirical side is less in evidence and it is much more of an adventure tale. It is a story about having survived a trip onto an immense whirlpool situated somewhere between the islands surrounding Norway. Apart of the location, the story is more one of pure adventure than of satire. In MS found in a Bottle the narrator is quick to establish his bona fides as a man of logic who is singularly without imagination so that his tale of being taken on what appears to be a ghost ship hurtling towards the South Pole, which account he stored in a bottle and presumably threw overboard in the hopes of having it found, should be taken seriously.

Perhaps his best Science Fiction satire is the one in which the narrator succeeds in traveling from the earth to the moon in a hot air balloon. In The Unparalleled Adventures of One Hans Phaal Poe uses what is presently known of science in his period – such as the distance between the earth and the moon in various areas of the moon’s orbit, and what is known about the earth’s atmosphere (how far it extends, what changes happen in its composition when one goes up to certain heights, etc.) Indeed Hans Phaal provides us with a complete journal describing his adventures in minute detail and it’s this detail which gives the tail its seeming rationality and underscores its satiric nature since even within the story the trip is revealed as a hoax on the good burghers of Amsterdam.

Poe fans are often not aware of his forays into Science Fiction and Detective Fiction yet they have had considerable influence on both his contemporaries and those who wrote after him. In part two of this article I will discuss the stories and some of the poems Poe is best known for, including, of course, the poem The Raven.