I have spent a lot of time in previous posts dwelling in the past. I have been like an old man suddenly lost to the present, the memory of times past reeling behind his eyes while he absently stirs his tea. Well, I think perhaps I should bring this topic into the present and talk about some of the science fiction and fantasy artists working today.

I have spent a lot of time in previous posts dwelling in the past. I have been like an old man suddenly lost to the present, the memory of times past reeling behind his eyes while he absently stirs his tea. Well, I think perhaps I should bring this topic into the present and talk about some of the science fiction and fantasy artists working today.

Digital art, made possible by programs such as Photoshop or Painter, has exploded onto the electronic canvas of the internet like a Jackson Pollock painting. No longer do we rely on the “delivery devices” of magazines, book covers, calendars or the like. The art is completed and posted online within hours, sometimes in the very minute of its completion.

The digital revolution in art is a big topic and one that I will not tackle in this post. I’ll get to that later. For now I just want to touch upon a few artists still working with traditional materials today who, in my mind at least, stand above the crowd.

Dan dos Santos is a traditional artist born and raised in Connecticut. Dan’s work spans a variety of genres, including novels, comics and film. He has worked for clients such as Disney, Universal Studios, Boeing, Saatchi & Saatchi, Scholastic Books, The Greenwich Workshop, Penguin Books, Random House, Tor books, UpperDeck, Wizards of the Coast, and DC Comics.

Dan has been the recipient of many awards. Recently, he has received a 2010 Silver Medal from Spectrum, the 2007 Jack Gaughan Award for Best Emerging Artist, and was the Chesley Award winner for Best Paperback Cover of 2007. His illustrations have graced the #1 spot on the New York Times Best Seller list numerous times.

Dan’s paintings feature strong composition and colors and even stronger women. He is the cover artist for all of Patricia Briggs’ Mercy Thompson novels. His cover for one of those books, Moon Called, won him the Chesley Award for paperback cover illustration in 2007.

Dos Santos’ life long love of comic books, fantasy and science fiction, give his work an authentic “feel”. Even with a simple portrait of a figure, where the fantasy element is extremely sleight, dos Santos is able to imbue the image with an air of otherworldliness. This quality is what keeps him in high demand as an illustrator of the fantastic.

Dos Santos works with traditional oil paints on illustration board, but his paintings are readily viewable on the web (or on the covers of many of the science fiction or fantasy paperbacks in your local book store).

Another traditional painter, Donato Giancola was born in Colchester, Vermont in 1967. A lifelong fan of comic books, fantasy gaming and dinosaurs, Giancola has taken fantasy illustration and given it the touch on an old master. Armed with a BFA in painting from Syracuse University, Giancola has provided stunning work for major book publishers and collectors in New York as well as for concept design firms on the West Coast. Some of his clients include The United Nations, LucasFilm, National Geographic, CNN, DC Comics, Microsoft, The Village Voice, Playboy Magazine, the US Postal Service, Wizards of the Coast, Scholastic, Simon&Schuster, Tor Books, Random House, Time/Warner, The Scifi Channel, Milton-Bradley, and Hasbro. 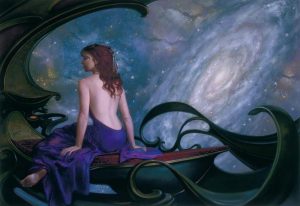 Giancola is the recipient of eighteen Chesley Awards from the Association of Science Fiction and Fantasy Artists, three Artist Hugo Awards for outstanding professional work from the World Science Fiction Society, and multiple silver and gold medals from the juried annual Spectrum: The Best of Contemporary Fantastic Art.

Giancola’s work is epic in scope and yet the detailed elements that are found in his canvases focus the viewer on the small and human qualities of the image. The detail that he puts into hands, in particular, is simply stunning. His work conveys grand emotion and yet it is not unrecognizable to the casual viewer. His color and composition are outstanding and his presentation of detailed and highly technological surroundings is extraordinary. His depiction of the vistas of space is almost overwhelming.

Above all of that, however, it is the human element, the figure in Donato’s work, that always remains the focus. The complex play of emotions that they evoke from facial expressions and from carefully constructed gestures, make Giancola’s work stand head and shoulders above almost all others. 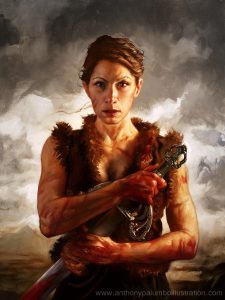 Anthony and David Palumbo grew up in Pennsylvania in an artistic household. That is a bit of an understatement given their artistic pedigree. Their mother is fantasy artist Julie Bell and their stepfather is none other than fantasy artist legend Boris Vallejo.

Both brothers are accomplished gallery artists. They regularly do portraits and show their work in galleries, but they are also both accomplished fantasy illustrators. David Palumbo has been a regular contributor to Heavy Metal Magazine and has painted dozens of book covers, as well as numerous illustrations for Magic: The Gathering as well as Lucasfilm, Marvel Comics and Wizards of the Coast.

Anthony is a gallery artist as well as an illustrator. His gallery work is included in the collections of prominent institutions. As an illustrator his work has appeared on a multitude of book covers, collector cards and video games. He has also done work for Heavy Metal Magazine as well as Wizards of the Coast and Fantasy Flight Games.

Their styles are similar to each other but not really similar at all to their mother’s or to Boris’. That they come from a tradition of fantasy illustration, however, is clearly evident. Both brothers have incredible skills with the paints and a real talent for depicting fantasy and science fiction elements.

Both artist work mostly with traditional oils on canvas or board.

I have examined barely a handful of artists in this post and all of them have been traditional artists. But fantasy art is no longer limited to traditional oils, acrylics or watercolours. There is a whole host of digital tools available now that fantasy artists are using to produce mind-blowing imagery. Next week I’m going to talk about some exclusively digital artists and we’ll see some amazing images along the way.

As always, if you think I’ve missed something or gotten something wrong or if you just think my banter is boring, let me and the rest of the internet know about it. Use the comment box.

It’s not just holding down the page. Give me a piece of your mind.

In this week’s viewing: Premiere time is front-loaded with the big names, and they do deliver.

In this week’s viewing: Tanya the Evil climbs the corporate ladder, the bureaucratic machinations of ACCA get ever more complicated, and more!

The Artful Collector: Handling Difficult People Part 3 – What makes Artists and Collectors Fun to Deal With?