Human beings have always had a fear of and, at the same time, a fascination with the “other”.

Almost as soon as humans were able to make art on cave walls depictions of strange and bizarre creatures began showing up amongst depictions of their fellows and animals. The stone walls of ancient Egypt were rife with depictions of gods with human bodies and the heads of jackals or eagles or snakes.

In modern times, when gods were replaced with aliens, depictions of beings from other planets have ranged from the sublime to the ridiculous.

J. Allen St, John, a marvelous illustrator from the very earliest part of the century, had the enviable opportunity to be one of the first to illustrate the fantastic tales of Edgar Rice Burroughs.

Although mostly remembered as the author who created Tarzan, Burroughs also wrote planetary romances set on the Moon, Mars, Venus and even at the earth’s core. Burroughs’ books contain a menagerie of alien creature which were ably depicted by St. John. From Martian Thoats to Lunar Kalkars St. John’s depictions inspired the imaginations of readers of the Blue Book and All-Story Magazines where Burroughs’ stories first saw print. 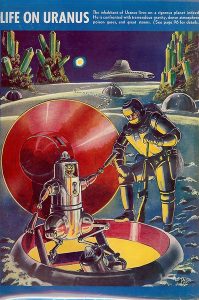 Amazing Stories, of course, was no stranger to alien creatures. The pages of that pulp magazine were chock full of all manner of odd and bizarre alien creatures. The chief artist of the magazine, Frank R. Paul, depicted his fair share of extraterrestrial creatures. As adept as Paul was at depicting architecture and futuristic machinery, his skill left a little bit to be desired when it came to human anatomy. His aliens were similarly clumsily rendered. An artist needs to be fully conversant in human and animal anatomy before he or she can successfully subvert the form in such a manner. Paul did try and his alien creatures are suitably outre if not entirely believable.

One of the ways he would work around that shortcoming was to suit his aliens up in metal suits. As in his 1940 illustration for Life on Uranus (insert sophomoric joke here) Paul depicts a frog-like alien but only its face is visible through the front plate of a helmet. The rest of the structure is merely suggested by the configuration of the metal suit.

Of course, Paul is famous for one of the earliest depictions of a well-known alien — the martians from H. G. Wells’ War of the Worlds. Paul naturally chose to depict only the Martian’s tripod walking machines and not the biological creatures themselves on the cover of Amazing Stories in 1927.

Another workaround by early artists was to render a multitude of tentacles, as with an illustration by Leo Morey of the flying star-fish for “Dragons of Space” in Amazing Stories Quarterly in 1930, which depicts hapless cow being hauled up into the sky by such a collection of cephalopod-like protuberances. The first depiction of the fabled “cattle mutilation”? Perhaps.

As the century moved on strange things began to be observed in the skies above North America. Beginning with Kenneth Arnold’s sighting of craft that he described as “saucer-like”, to the infamous Roswell Incident, the late 40’s and early 50’s were ripe for an invasion from another planet, even if only in the paranoia fueled imaginations of a generation brought up with the realities of war on a massive scale and a growing Communist menace.

Aliens were often described as the “little green men”. No little green man was ever painted as well as by Frank Kelly Freas for the cover of Astounding Science Fiction in September of 1954. Freas’s pointy-eared martian illustrated Frederik Brown’s classic story Martians Go Home. The story was a comic science fiction tale but the painting, as whimsical as it is, is not cartoony at all. The Martian’s mischievous grin is clearly grounded in reality.

Out of this confluence of fear and suspicion came arguably one of the most iconic aliens that has ever been committed to print: Topps’ martian invaders from their MARS ATTACKS! series of bubble gum cards. 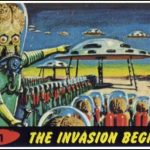 The cards were lurid depiction of a Martian Invasion of earth and each card was painted by veteran pulp artist Norman Saunders. Saunders’ depiction of the hideous, skull-like, large-brained martians undoubtedly invaded many a nightmare of American schoolchildren through the early 60’s

Eventually the paranoid attitude of the fifties gave way to the peace and love of the sixties and attitudes about the “other” softened considerably. Aliens were no longer out to kill us or steal our stuff. Aliens now represented the alluring of the new and exotic and the open minded youth culture embraced the alien as never before. 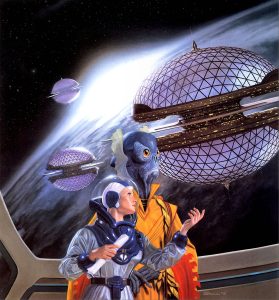 Indeed, the generation of “peace and love” gave us aliens that were oddly attractive in ways that they hadn’t been before. Some aliens were even sexy. This was the time of the green skinned women in silver bikinis.

Aliens tend to be more successfully depicted when the artist has a firm grasp of anatomy and biology. There are many very talented artists painting covers for science fiction books today and there are various and sundry depictions of aliens. One really good and relatively recent example is one from artist Steven Youll. Youll painted the cover art for Playing God by Sarah Zettel. The whole painting is a science fiction tour-de-force, but the alien him(her?)self is tall, serene, stately and completely believable despite a resemblance to something you would find on your plate at a seafood restaurant.

Another great artist who has been knocking out covers for several decades is Michael Whelan. Whelan probably deserves to have a whole post dedicated to his work alone (and I will likely get around to doing just that before too long) but his artwork is so striking and his grasp of anatomy so clearly evident in the way that he depicts non-human creatures. There is no better example of this than a series of covers he did for a re-issue of Edgar Rice Burroughs’ Mars books. His grasp of anatomy makes the weird creatures of Burroughs’ Mars — the Thoats and the Tharks — seem perfectly believable. The viewer would have no trouble buying into the idea of these creatures as real beings that could walk off the page and interact with us in reality.

So, like J. Allen St, John almost 100 years before him, Whelan helps to bring the wonder of Burroughs’ alien worlds to life. And with that nice bit of circular happenstance I am going to leave the aliens and move on to other topics. This topic, however,is a big one, and I am certain that I will revisit it at some point in the future.

I’ve only been able to mention a few a few artists and iconic aliens in this post. If I’ve missed your particular favorite, or if you think I’m wrong about something or you just don’t like the cut of my jib, don’t just grumble to yourself.. Use the comment box. Tell me and the rest of the world about it.

That’s what it’s there for. Give me a piece of your mind.