Hello and welcome to what will be an occasional feature on my blog!

So – what, exactly, do I mean by ‘unknown or underappreciated’?

To put it simply – not everyone is a Kevin J. Anderson or David Weber or Eric Flint or Robert Heinlein. Some authors – I would venture to say, MOST authors – produce perfectly fine books: readable, enjoyable, well-structured, skillfully plotted and with fully-developed characters. And yet, something happens.

I’ve been reading SF for basically my entire conscious life, and when I like a book, I hold onto it. So, for you lucky, lucky readers, I’m diving back into my stacks to find books which deserve another shot at the sunlight. 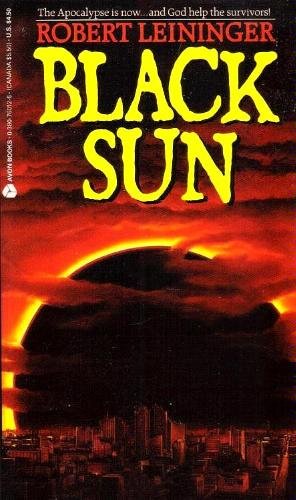 This week, we have Black Sun. Published in 1991 by Avon books as a thriller, it is truly a pure SF take on a potential end of the world. The hero is Dr. Maurice Tyler, a divorced and disgraced astrophysicist teaching at Northern Arizona University. He discovers a disturbing potential cataclysm involving the sun, sunspots and magnetic fields and dashes a quick paper off to his former mentor.

Unfortunately for the world, Dr. Malcomb Cooke (the mentor) discards the paper, so when the theoretical model Tyler had postulated begins to take shape, and the scientific community is screaming for answers, none are to be found.

Set against the backdrop of a rapidly-cooling Earth, Tyler confronts both Dionne and Blackburn. Settling his difference with Dionne, the two flee Blackburn to rescue her daughter, left with a sister in Southern California.
I won’t tell you how it ends, of course; suffice it to say, it is thoroughly satisfying.

Leininger has a nice touch with the characters, bringing both Tyler and Dionne to vivid life. A quick excerpt:

He moved quickly, opened a dresser drawer that held his shirts. He took out the .357 Magnum, thumbed back the hammer, aimed the weapon.

“Hey!” he yelled.His eyes widened as the lump stirred, the blankets moved, and Gail Dionne looked out at him sleepily, eyes blinking.

“What…? What the hell are you doing?”

You don’t have to yell.

The dialogue, while dated at times (Tyler boasts of his Ardax II – a “powerful thirty-two-bit personal minicomputer”) stands up well; the science is plausible enough to allow for believability; the effects of the catastrophe are made terrifyingly clear; and the resolution is, as I said, satisfying.

Definitely a book for any fan of hard SF. If you can find it, grab your copy today. Personally – I’ve had three copies. The first, I lost; the second, I read until it fell apart; and I’m on the third one now (thank goodness for internet auctions!).

Moving forward – I welcome your comments and suggestions! If there is a book YOU want me to review, drop me a line! You can find me on Facebook (very creatively, Adam Gaffen) or you can send an email to OR you can simply leave a comment here!

Thanks – and I’ll be back soon with another lost treasure!

The Dangers of Ignoring the Ebook Revolution

Ecuadorian Zombies! Do they say “Sesos!”?