Home Uncategorized Dress For the Occasion: The Scantily Clad Female

So, here’s a question:

Say you’re a beautiful woman (I assume some of you reading this actually are women. Please believe me when I say that in my eyes all women are beautiful. If you’re a man reading this, then use your imagination) and you need to leave the relative safety of your spacecraft to go out into the vacuum of space or maybe planetside where there is a strong possibility that you will run into hostile aliens.

What do you wear?

Conventional wisdom would suggest that a self contained space suit with a substantial air supply and radiation shielding. That sounds reasonable, doesn’t it?

But not so fast. If we’re examining the history of science fiction illustration (which, at the moment, I am) then we have to think outside the box of conventional wisdom. Here we must enter the strange wisdom of the science fiction cover illustration.

So, what does the typical beautiful woman wear into space?

How about an evening gown?

That seemed to be a good idea to the woman depicted in a Norman Saunders’ painting for Marvel Science magazine in May 1951 in which two adequately suited spacemen appear to be manhandling a negligee-clad woman into a spaceship.

Now, according to something that we like to call science, the human body cannot survive unprotected in a vacuum. So the chances that the lovely lady in this painting is alive are slim to 0 to the power of 10 billion. She does, however, leave a beautiful corpse, which is surprising since her body has been exposed to hard vacuum. 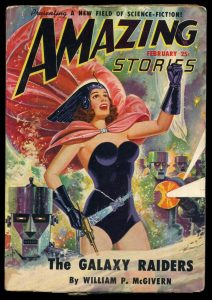 Okay, let’s try another example: Suppose you are the human leader of a galactic army of robots. What would you wear that would be suitable imposing alongside your metal soldiers. One would assume a suit of protective body armour would be called for, but not so fast!

How about a black one-piece bathing suit? Sounds reasonable to me. We’ll accent it, of course, with a winged helmet (one that does not cover your beautiful features, of course), black gloves, a sparkly belt and a flowing red cape. For your own defense you also have a gold plated laser pistol.

Sounds crazy? Not according to R.G. Jones in his cover illustration for William P. McGivern’s The Galaxy Raiders in Amazing Stories in July of 1950.

Let’s try another one; you’re a beautiful woman and you are floating among the asteroids fighting with some sort of laser whip against a bald-headed assailant. Do you wear a protective spacesuit? Okay, sure, this time you do. Is it armored to protect against an obviously lethal laser-type weapon?

Of course not! It’s completely transparent. You have an upside-down fish bowl as a helmet and a space suit made of saran wrap. So, what are you wearing underneath all that? How about a low-cut red bathing suit with funky pointed shoulders and a pair of red pumps?

Am I mad? Well, perhaps… but this idea seemed to make sense to Kelly Freas when he supplied the cover art for the November 1953 edition of Planet Stories.

The point is that throughout its history the “literature of ideas” has been saddled with artwork that, although fabulously rendered, has been consistently redolent of adolescent imagery. Certainly the majority of science fiction readers has in the past been mostly male and young, but that may have been a bit of a self fulfilling prophecy when the artwork that attracted readers seemed specifically designed to zero in on that demographic.

I’m not done with this topic and I will revisit it again in a future post. As always if you disagree with anything I have said, or feel I have missed anything (like the point, perhaps?) don’t keep it to yourself. Use the comment box. That’s what it is for.

Give me a piece of your mind.

Book Review: The Doors of Sleep by Tim Pratt